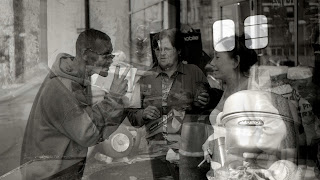 1.
Culture exists in both what we consider to be vital and what we consider decayed. One must not overlook the latter as possessing its own culture, identity, and interests. It is this division between the cultural high and low that subjugates either side to the devices and structures of the other. Most important to arriving at this understanding of perceptual awareness is the space between cultures. It is crucial to experience this space as a vantage point to look upon both ends simultaneously in the development of social critique.
At the center of each culture exists the Cultural Node, a location of concentration, not defined by measures such as size or physicality. It is the center of a particular culture, multiple cultures, and that leading to new cultural definition. The Cultural Node is characterized by its level of activity and congregation, often leading to this new cultural definition through human behavioral necessity, its ability to overlook prior social and economic prejudices.

Derive Towards The Cultural Node:

I began with disorientation, which can be hard when you make a habit of it. Once you have walked all the streets of an area, you are forced into a much deeper commitment with your exploration, leaving the streets for the spaces in between them. 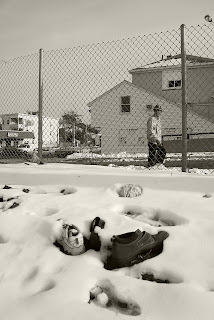 I find the most objective way to accomplish this is the Edge Jump. As you travel, find a barrier defining the edge of a space, overcome it, and put yourself into the foreign space.

As I walked down Gardiner Street cobblestones emerged from the pavement, fighting their way through, and speaking an allure to the space. Stop and make a directional shift. I looked over to the empty parking lot of the Boys and Girls Club and decided to investigate it, and find its edge. Meeting a gnarled looking chain link fence I stopped again to reflect upon my location. The manicured grass and sidewalks of the Boys and Girls Club met harshly with a hole in the fence, pushed open into a trail leading away towards an abandoned street. I made the Edge Jump and immediately found myself in a narrow trail surrounded by weeds almost as tall as me. This completely overgrown spot had a strange and conflicted emptiness to it as nature slowly took it back, the plants and dirt engulfing it into the earth. Up to the right of me, a train lurched to a stop, halting me as well with its ominous mass. The joints between each car slammed into each other, metal on metal in a chain reaction dissipating into an echo to ride the city’s skyline. The sound anchored me to the ground and I observed the well worn trail I stood upon. 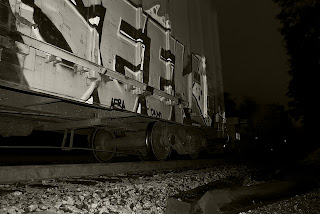 Though the road was fenced off at both ends, people forced their way onto it, jumping and squeezing through fences to get somewhere personal, perhaps home or the cultural node, the end I seek.

Now, thoroughly disoriented, I stood in the middle of this abandoned street, a foreign place in the middle of a city I claim to know well. The street lights strangely still worked, lighting a desolate urban jungle. Strangling vines competed with young trees, and shaded over a barely noticeable pile of wood. Poking up from a thick mass of weeds, its sign still stood eerily, ‘Tainter St.’ In that moment as I stared up at the sign, the history of the space flooded into a vision of space and time. I could see the boarded up factory in the background, as it  was built, brick by brick employees filed in every day. They used Tainter Street to get there and where I stood in that moment they kept their products and machinery next to the train tracks ready to go. One day with a long and sad build up to the moment, the factory had to be closed. Person by person the bustle of the space dissipated and the fences were put up. Now the trains go by and a few people sneak through here from time to time on their way to someplace else. 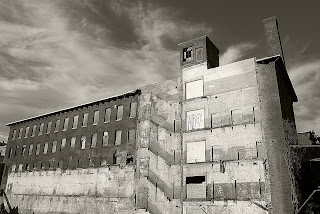 As I looked around the scene an especially high fence caught my eye and beckoned me to utilize its height for my own spatial understanding. In a fused homage to classic cartography and Nick Papadimitriou’s ‘deep topography’, I have termed Upland Coordinates, elevated locations which draw you to them to look down on a space. I climbed up to the vantage point on the fence to read the landscape, the open field in front of me leading up a slope to the train tracks. A tire drew me down off the fence to its resting place in the center of the field, surrounded by nothing. I could see a montage, a lifetime of burden, amongst a team of other tires, flexing and grinding along the pavement to eventually fall over on its side in this field. Looking into the center, I felt a temporal shrine quality radiate from the tire. As if a post-industrial shaman, I knelt down before the tire to look up at the tracks, praying for the preservation of the space, for the health of its character, or its historical layers to age into an elegant shade of sepia.

I finished my prayer and felt a sudden punctuation in the timeline of engagement with the space. My lens zoomed out and a flickering streetlamp outside of the fence seemed a Morse Code gesture to make another Edge Jump. Over the the fence and back onto the street, public space smoothly guided me back up towards Main Street. I looked back onto Tainter Street, it still resonating with detail fading into darkness. 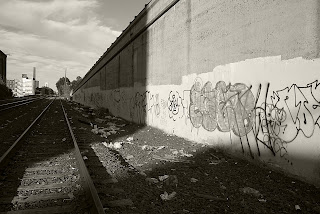 Moving quickly up Ripley Street, I gravitated towards noise and light like a moth. Close to Main Street, a back yard party created a beacon in the night. Reggaeton blared, and the attendees stumbled around, one of them bumping into lawn ornament. I thought of the physical object and the spectacle it lived within, this back yard ritual. For reasons unknown i felt repelled by something perverse and I was back in motion, onwards to Main Street. 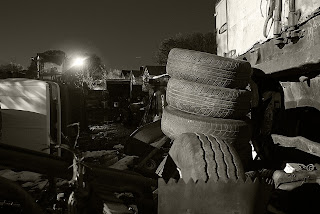 Passing through Tainter Street was necessary to bring me towards this Cultural Node. It is this spatial experience that drove me down Main Street. I viewed everything as if looking through the portal of the tire, a collective character that is Worcester. 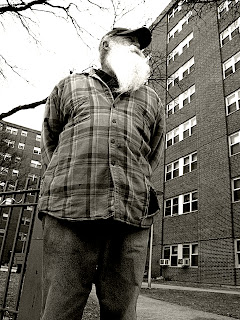 I walked down Main, feeling an implied direction, a building of culture that I had to follow. You begin to see people as temporary landmarks, sitting and standing, gathering around the node. The first Cultural Node I came to observe was close to the intersection of May and Main. Pennywise Market, is a bottle redemption, liquor store – all in one multi function depot.

I took a seat outside on the sidewalk, to observe the cultural events; one drug deal, a few excessive alcohol purchases, a man reaping the fruits of his hard work collecting cans. Nothing out of the ordinary for the space. Not feeling a deep enough understanding of the space I searched for an Upland Coordinate to elevate my view from. A nearby fire escape to rooftop transition quickly had me looking down on May Street in front of Pennywise. I saw the neighborhood surrounding, the autobody across the street, an unkempt vacant lot, a school, a donut shop. I saw the cryptic communications of some guys from Kilby Street Posse and was drawn beyond to the other side of the street. Down and off the roof I crossed over to view an old concrete staircase to nowhere, an entire fenced off vacant lot behind a desperate and weak chain link fence. I looked back to Pennywise, to watch the space from another angle. The flow of decay became obvious and I could look deeper into its structure. I could see the young and the old, those who will one day push a shopping cart full of empty cans to the back door of Pennywise, every day until either death or some spiritual moment beforehand. The culture revealed itself as a grinding exchange; survival instincts accumulating waste to eek out a living. This is a culture centered around a secondary urban economy with an old rusty engine called Pennywise. 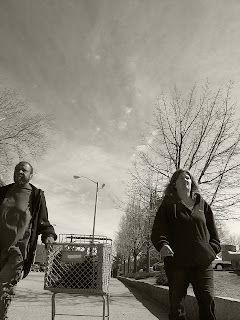 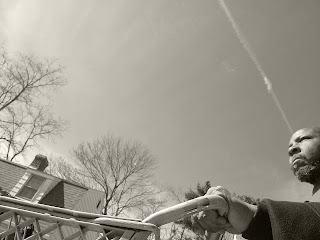 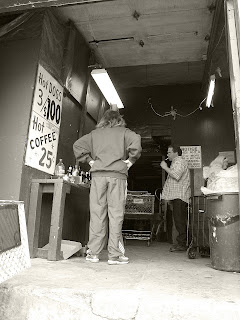 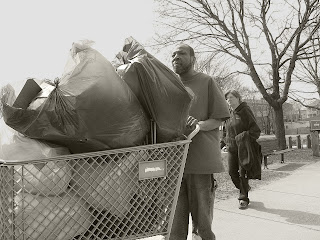 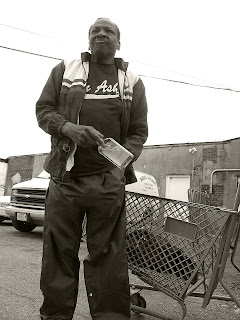 Then occurred the moment of utmost importance in this walking quest. I have looked deep into the people of a space, and as I form a mental image of it, I must make a judgement. At this moment I saw a blurring of cultural lines, between the high and the low. I saw many spatial details of interest, and however repulsive they may be to some, in that moment I saw them as still belonging to a particular cultural identity.

I kept moving, with this image of a Cultural Node growing somewhere between my eyes and consciousness, coursing through neuropathways as i walked Main Street. I passed some stores, all of them closed, and stopped to gaze at an old payphone post without the phone, a recent past relic of our telecommunication trend. Whenever I see these abandoned boxes I travel in time slightly. Phone numbers etched into the black paint display years of people I would never know but be forced to imagine.

Another image flashed from my memories. A few blocks away from this spot, I walked past a man hunched over a similar phone-less phone booth with a friend shielding him with his jacket. He was smoking crack. I continued walking by, not wanting to disturb them, but as I came back to revisit the memory, I saw the vast spectrum of the Cultural Node. I stared into the artifact and traveled from Tainter Street to Pennywise from one abandoned phone booth to another. This last spot brought me to understand the Cultural Node as it stands in time. In all its present activity, it is distant from the liminal space of Tainter Street, but in order to clearly view it, one must develop a sense of history. It is this sense of chronology that stands boldly in these cultural margins, and can allow one to understand what is present. I develop a sense of dark humor in viewing the forgotten spaces between our present function, these memories now filled with our waste. 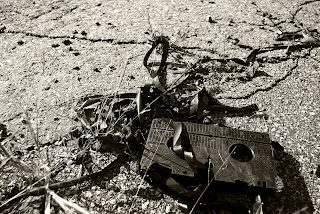 Gazing into the past,
I found a man there, silent as the night. I crawled through the brush, up onto the abandoned loading dock of an old boot factory. When I poked my head up I was confronted by a societal ghost. We did not exchange a single word. There was the understood silence of us outsiders. I walked around and snapped a few insincere photographs while I imagined this man’s life, transient and memorial. He sat like a statue, watching the skyline, occasionally looking down. 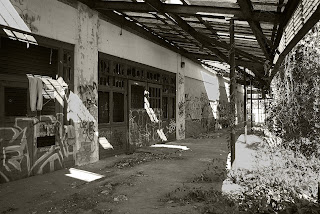 He dried his clothing in the sun, as the tallest tower of the factory stood on the skyline behind him, begging for resolution, to be torn down or restored. The freight train lurched back into motion and he did not get onto it. I made my way through the brush, back to the train tracks, back to the streets, and back towards the cultural node. 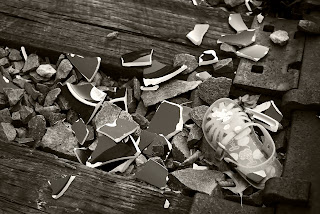 One Reply to “The Culture of Waste”