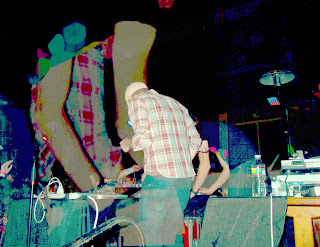 The Hood Internet @ Clark University
By Sampson Wilcox
Aaron Brink (aka ABX), and Steve Reidell (aka STV SLV, pronounced Steve Sleeve) formulate The Hood Internet, a mashup specializing DJ group.
Pop is inherent to dance music and what is clearly Hip-Hop about The Hood Internet is there decisive referencing through sample work. They make mashups from popular music they enjoy listening to, and do it well.
To understand their compositions, viewing the internet as a medium in itself is important. Though they started the group together in Chicago, in 2007, they do not live or work together most of the time, and thus collaborate through the internet. This sound space they create blends genres of traditional hip-hop rhythm and lyrics, with the more eclectic, indie instrumental and vocal material. They were first together in a Chicago Indie band, “May Or May Not”.
What is most impressive about The Hood Internet is their technological approach. As DJ’s they use electronics as instruments, and embrace the power of technology to connect ideas that cross traditional boundaries of time period and genre.
Just take a look at the tracklist for “The Hood Internet – Mixtape Volume Five”
1. Intro [R. Kelly x Drake x Ally Sheedy x Tim Blaney]
2. Bars In The AM [Ninjasonik x !!!]
3. L is For Love Junkie [Donwill x Harlems Cash x Peter Hadar x El Perro Del Mar x Caribou]
4. Hot Tub Freaks Like You [Slug x MURS x Tobacco]
5. Rude Baptism [Rihanna x Crystal Castles]
6. Ariel Pink’s Haunted Graﬁtti – Round And Round (The Hood Internet remix)
7. Moar Doo Wop N Whatever [Lauryn Hill x Deadmau5]
8. Show Me Red Lights [Robin S. x Holy Fuck]
9. Psycho Break [Talking Heads x Ellen Allien & Apparat]
10. Show Me The O.N.E [Yeasayer x Jump Jump Dance Dance x Grum]
11. Back You [Cee-Lo Green x Sir Mix-a-Lot]
12. Freeze, Barbra! [Young Dro x Gucci Mane x Duck Sauce]
13. Blowin’ Money At The Deli [Drake x Birdman x Delorean]
14. It’s Front Row Love [Metric x Treasure Fingers]
15. Giving Up The Sunshowers [M.I.A. x Vampire Weekend]
16. Ignition (Keep It Remixing Louder) [R. Kelly x Major Lazer]
17. Chi Citizens [BBU x Broken Bells]
18. How Purple Can You Go [Ludacris x Joker & Ginz]
19. Swag Boost [Soulja Boy x Rusko]
20. Lorem Ipsum Dolor Sit Amet [Waka Flocka Flame x Flock Of Seagulls]
21. Cards And Quarters And Green Lights [Local Natives x John Legend x Andre 3000]
22. Oh My Kids [Usher x Sleigh Bells]
23. Virginia Is For Cameras [Clipse x Matt & Kim]
24. Dougie Vision [Cali Swag District x Toro Y Moi]
25. This Shit Was (All I Know) [Drake x Free Energy]
26. Brigade & Yellow [Wiz Khalifa x The Go! Team]
27. Shutterbugg In Miami [Big Boi x Foals]
28. Nuthin’ But A Journal Thang [Dr. Dre x Snoop Dogg x Class Actress]
29. The XX Gon Give It To Ya [DMX x The XX]
30. Outro [John Barry x Faith No More x Larry David x Robin Bartlett]
The amount of free music they offer online also speaks to the breadth and possibilities one can articulate with the sound of the mashup. Consistently they present dance music, but their mixtapes and albums give a fuller view of their concepts of individual song production. They use a program called “Ableton Live” to produce, and when asked about the difference between live production and the tracks they post online, they said they use many of the same pieces, but the blending of tracks takes on a more extended intro/outro process with their live performance.
We also discussed an internet endeavor they spawned while touring in Florida, “Album Tacos”. They started a tumblr site of numerous album covers with tacos photo-shopped into them, opening it up to public submissions. They said that though it had run its course, as many internet phenomena do, it received some recognition, and in fact, it lives on in the comic this week, in which they requested to be depicted as animals, a manatee and lynx (back page).
On a more basic human level, they are fun guys with a sense of humor. “In our spare time, Aaron teaches a karate class for kids, and Steve studies typography.” I asked them about their most embarrassing tour experience, and they first answered, “getting lost everywhere we go, even though we both have phones,” “Its usually something really stupid, like in Dumb and Dumber when they’ve been going the wrong way on the highway for 100 miles.” As they moved on to more specific moments, they recounted, both falling off the stage at Bonnaroo, explaining with a chuckle “it wasn’t a very good stage.”
They put on a great show at Clark, going beyond just performing good music to dance to, and created interesting music to listen to.
you can check out their music @ http://www.thehoodinternet.com/
and follow them on twitter @ http://twitter.com/hoodinternet/ 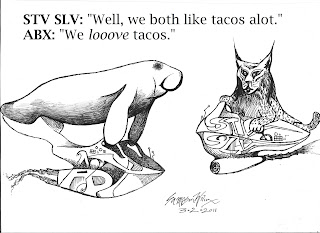